This article is about the character from the 2003 film. For other articles with a similar title, see Wendy Darling (disambiguation).

Mother (by Peter and the Lost Boys)

Wendy Darling is the protagonist of the 2003 adaptation of Peter Pan.

She is played by Rachel Hurd-Wood.

Wendy is first seen telling a story to her two younger brothers, John and Michael. She lives with them and their parents, Mr. and Mrs. Darling. Her aunt Aunt Millicent convinces them to put extra thought into Wendy's future, since she is twelve and on the brink of becoming a woman.

Wendy catches sight of Peter Pan at school she is caught drawing an image of the boy. The teacher, Miss Fulsom, writes a letter of outrage to Mr. Darling and has a delivery boy take it to him. Wendy rushes to stop him, but she and the family dog, Nana, accidentally disrupt Mr. Darling's job at the bank. Furious, Mr. Darling chains up Nana and scolds Wendy, declaring her it's time for Wendy to leave the nursery because she is growing up. In the latter, he declares that he wants to become "a man that children fear and adults respect", strongly implying that the children of London are afraid of men like Mr. Darling. Apparently, this fear extends to his own children, especially Wendy.

That night, When Peter enter the nursery he tried everything to get his shadow to stick back on, that's when Wendy had an idea she can sew his shadow back on but she warned him that it will hurt a little. After, sewing his shadow back on Peter bragged that he took all of the credit and Wendy went back to bed and Peter told her about the lost boys and he gave her an acorn kiss. Wendy is introduced to Tinker Bell, who doesn't like her from the start, and she and Peter share a "kiss" in which she gives him a thimble and he gives her an acorn. She wakes up John and Michael and with happy thoughts and Tinker Bell's pixie dust, the children are lifted into the sky. After some encouragement from Peter, Wendy reluctantly comes along with him.

After meeting Peter Pan, there is a degree of innocent or implied flirtation with him, which cause his fairy Tinker Bell to be jealous. Wendy also succeeds in giving him the "hidden kiss" in a dire situation.

Wendy realizes that Peter's refusal to grow up is not healthy and he's far from what she thought he would be like and by the end, she wants to grow up. She's aware of her feelings for Peter (more so than any other portrayal of Wendy) and is aware that he loves her too on some level. This film had the theme of Wendy's increasing maturity - a theme brought up by her aunt in a very early scene and confirmed by her father in a seething tone a while later; and since Hook is taken as an adult variation of Peter, then her brief attachment to him could be seen as signifying the way in which she's beginning to cross over into the world of the adult, leaving childish relationships and notions behind. The film asserts that Wendy is already too grown up for Peter, as there a moment where she anticipates her first kiss, and Peter is clearly not on the same wavelength; but it shows she is still a child because she turns her head for her cheek to be kissed. She and Peter will always have a more than friends relationship. She enjoys telling stories, especially about Peter, or the pirates aboard the Jolly Roger. She is more spunky than any other portrayal, since she has a strong will and is not at all afraid of Captain Hook. 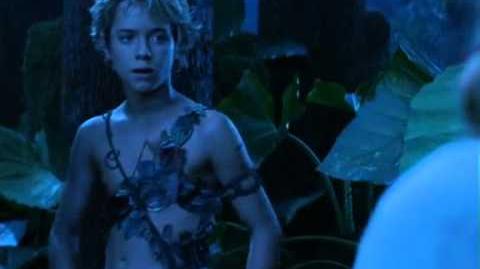 Peter Pan What Are Your Feelings HD