Start a Wiki
"Fairies have to be one thing or the other, because being so small they unfortunately have room for one feeling only at a time."
J.M. Barrie, Peter Pan

Tinker Bell is a fairy who lives on the mystical island of Neverland.

She is Peter's fairy companion. She wanted to kill Wendy out of jealousy, and tricked the Lost Boys into shooting Wendy. Sue

She later redeemed herself by saving Peter's life, by drinking up the poisoned medicine Peter was about to drink. Peter rescued her by calling on all of the children who believe in fairies to clap their hands.

Tinker Bell is stated to be so tiny she only has room for one emotion at a time. This later causes her to try and kill Wendy, as jealousy is the only emotion she feels at the time.

She finds it annoying how clueless Peter is when it comes to the emotions of girls, regularly calling him a "Silly Ass" (censored in later additions of the story).

She is willing to risk her life for Peter, drinking his medicine when she knew it was poisoned in order to stop Peter from drinking it when he ignored her warnings.  She is shown to have quite a temper, easily being angered. King Oberon (Fox) 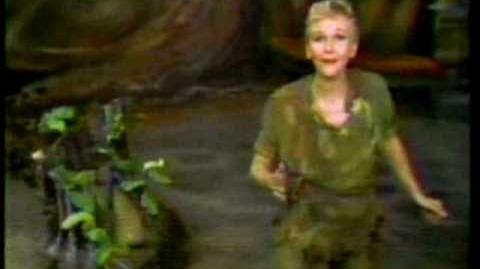 Clap if you believe
Add a photo to this gallery
Retrieved from "https://peterpan.fandom.com/wiki/Tinker_Bell?oldid=7531"
Community content is available under CC-BY-SA unless otherwise noted.