Tiger Lily is a Princess of The Piccaninny Tribe  who lives on the mystical island called Neverland.

She once was captured by Hook who planned to kill her. Luckily, Peter Pan came to her rescue and freed her. To thank him for saving her life Tiger Lily became allies with pan and introduced him to her native tribe, known as the The Piccaninny Tribe. Ever since then, the Piccaninny tribe and the Lost Boys have lived side by side in peace. It is assumed that she disapproves of Wendy Darling and even Tinker Bell at one point because of her envy.

In the Disney version, Tiger Lily is kidnapped by Captain Hook and Mr. Smee. Hook threatens to kill her if she does not tell him Peter's hiding place. Save for a brief call for help (which is the closest she ever comes to speaking, although her cry is muffled by water as she sinks, but one can still tell and it's apparent), she remains silent, as she does through the whole movie, refusing to betray Peter. She is saved by Peter and he takes her to her tribe. During the celebration of her return, Tiger Lily shows her affection towards Peter. At first, Peter watches Tiger Lily dance, then Tiger Lily jumps down and gives Peter a kiss. This turns Peter bright red. Then they dance together, which makes Wendy very jealous. Canadian actress Corinne Orr voiced Tiger Lily's only line (albeit in an uncredited, early role).

In the rather dark adaption French comic book series of Peter Pan, Tiger Lily makes a few appearances as a rather spoiled princess. She is saved by one of Peter Pan's best friends and her father remarks that he is worthy to be her husband but Tiger Lily refuses and wants to marry Peter Pan instead as she forces a kiss on Peter Pan's lips, Peter Pan shocked and upset pushes her away in rejection. Her father is displeased with her behavior and Peter Pan and his friends leave.

In Fox's animated series adaptation, she has a brother named Hard-To-Hit, and somewhat of a bigger but recurring role here, and more likely speaks. Their tribal chief is known as Great Big Little Panther, who's also their father. She and her sibling sometimes accompany, and assist Peter Pan, Tinker Bell, The Darling Siblings, and The Lost Boys on the adventures that they have together. There doesn't seem to be any competition amongst her, Wendy and Tinker Bell for Peter Pan's affections in this version. Here, she is portrayed by voice actress Cree Summer.

In the 2003 film adaptation, Tiger Lily is sitting in a tree when John and Micheal Darling are caught in a trap, presumably set for the pirates. She laughs at them and is captured by Hook, along with John and Michael. Peter and Wendy fly to the rescue. Tiger Lily, John and Michael are attacked by a pirate when they attempt to escape. John knocks the pirate into the water, and Tiger Lily kisses him, showing she may have romantic feelings for him instead of Peter. 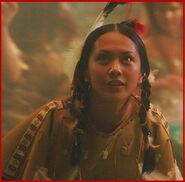 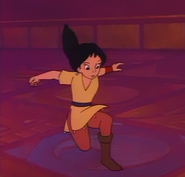 Burbank Films Australia Tiger Lily
Add a photo to this gallery
Retrieved from "https://peterpan.fandom.com/wiki/Tiger_Lily?oldid=7605"
Community content is available under CC-BY-SA unless otherwise noted.