Peter Pan inspired film The Lost Girls comes out this month on June 17! Check out the trailer on Youtube.

"Arrrrrr....blast Thy Peter Pan and his atrocious band of Lost Boys, our Captain Hook will defeat them all!" -Peter Pan

Pirates are the antagonistic group of foul mouthed and murderous criminal men who work for Captain Hook. They live on Hook's pirate ship in Neverland and are a major part of the Peter Pan story. They first appeard in J. M. Barrie's classic children's novel titled Peter and Wendy, published in 1911.

The only official Neverland pirate crew in the original is that of Captain Hook, although some adaptions have included other crews as well.

Jake and the Never Land Pirates[]

Captain Hook's crew boils down to the characters Smee, Bones and Sharky in this show. And in this cartoon, virtually all adult characters are pirates following the franchise's rule that the only adults in Neverland are pirates: Red Jessica, Captain Flint. And characters were made that are two things at the same time and one of them is a pirate: Pirate genie, pirate princess, pirate magician, mummy pirate and so on. 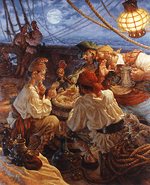