Peter used to wield the "Pan sword", a strong blade which was longer than any other possessed by the Lost Boys. After he left Neverland it was used by the new leader of the Lost Boys Rufio, who gave it back to him when Peter returned when he was convinced that he was really Peter. 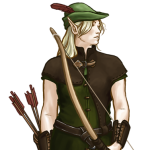