As Wendy Darling adds daring twists on classic stories to her brothers, John and Michael, she is visited by Peter Pan. Peter, a boy who magically never ages, invites the three of them to Neverland, an island where he lives with the Lost Boys. However, once they arrive, Wendy and her brothers are kidnapped by Captain Hook. Peter, with assistance from his fairy Tinker Bell, must face Hook in order to rescue the Darlings.

In 1904 in the nursery of the Darling household, located in central London, Wendy Darling tells her younger brothers John and Michael stories of Captain Hook and his pirates. Unbeknownst to the children, Peter Pan listens to Wendy's stories from outside their nursery window. When their Aunt Millicent arrives, she judges Wendy to be reaching womanhood and advises the Darlings to focus on Wendy's future prospects. One night, Wendy sees Peter return to the nursery to watch her sleep, but he is chased off by the family's nurse dog, Nana. At school, Wendy is caught by her teacher drawing a picture of Peter. During an attempt to stop the messenger from delivering a disciplinary letter, Wendy embarrasses her father in front of his superiors when Nana chases her into the bank. Mr. Darling chains Nana outside and declares that Wendy will leave the nursery.

Peter and Tinker Bell visit the nursery again to look for Peter's shadow, which Nana had bitten off during his previous visit. He introduces himself to Wendy, who then sews his shadow back onto him. Peter invites Wendy and her brothers to Neverland so she can tell her stories to his gang of Lost Boys. They use Tinker Bell's fairy dust, and fly to Neverland. Nana breaks free and alerts Mr. and Mrs. Darling, but they arrive too late. Captain Hook and his pirate crew are alerted to Peter's return to Neverland and fire a cannon at Peter, Wendy, Michael, and John. Tinker Bell tricks the Lost Boys into shooting Wendy out of the sky with an arrow, who mistake her for a bird. When Peter arrives, they find her alive, as the arrow hit the acorn he had given her which she had made into a necklace. Peter banishes Tinker Bell and ends their friendship.

Wendy awakens and agrees to the Lost Boys' request to be their “mother”, while Peter takes the role of their father. Meanwhile, John and Michael encounter Tiger Lily, a Native American princess, and all three are captured by Hook and his crew, who take them to the Black Castle. Peter, Wendy, and the Lost Boys save them, as Hook is chased by the crocodile who has followed him for years. After a celebration at the Native American camp, Peter shows Wendy the fairies' home and the two share a romantic dance. Hook spies on the two of them and convinces Tinker Bell that Peter will eventually choose to leave Neverland for Wendy. When Wendy asks Peter to express his feelings, he angrily demands she return home, refusing to believe that he can ever feel love without having to grow up before flying off. Peter then returns to the Darling nursery and tries unsuccessfully to shut the open window, determined to keep Wendy in Neverland.

Tinker Bell leads Hook's men to Wendy's makeshift "house" and they carry a sleeping Wendy back to the Jolly Roger, where Captain Hook tries to entice Wendy to become a pirate and sends her back to the Lost Boys, unaware she is being followed. Wendy ultimately decides against becoming a pirate but urges her brothers to return home with her, as they are starting to forget their parents. The Lost Boys eventually decide to join them, to Peter’s dismay. As Wendy says goodbye to Peter, she leaves him a cup of medicine to drink. When Wendy leaves the hideout, she is ambushed by Hook's crew, who capture her along with the rest of the boys. Captain Hook poisons Peter's medicine but Tinker Bell intervenes and drinks the poison. Devastated, Peter repeatedly proclaims his belief in fairies, which reaches out to the residents of London and revives Tinker Bell. Peter saves Wendy and frees the Lost Boys and the children fight Hook's crew. Hook forcefully uses Tinker Bell's fairy dust to grant him the ability to fly. During their duel, Hook taunts Peter about Wendy wanting to abandon him, and how she will eventually grow up and marry another man. Weakened, Peter falls to the ship and is incapacitated. Hook allows Wendy to say goodbye to Peter before he kills him, and she kisses him, which brings back his happiness.

After Hook is swallowed up by the crocodile, Peter covers the Jolly Roger in fairy dust and flies Wendy and the boys back to London and reunite with Mr. and Mrs. Darling, who decide to adopt the rest of the Lost Boys. Slightly, who got lost on the way to London and arrives at the house late, is adopted by Aunt Millicent. Peter promises Wendy that he will never forget her and that one day he will return to visit her, before heading back to Neverland with Tinker Bell. Wendy, now an adult, narrates that she never did see Peter again, but she continues to tell his story to her own children, and in turn to their grandchildren.

Logo for the film 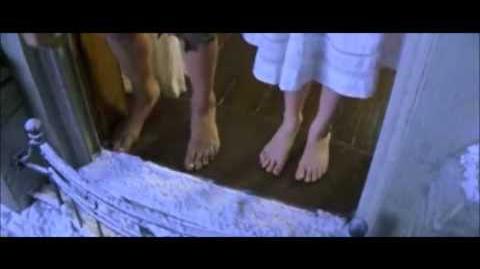