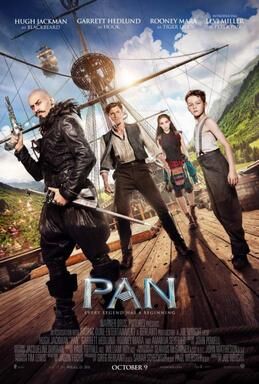 Pan is an 2015 British-American fantasy film directed by Joe Wright and written by Jason Fuchs. It stars Hugh Jackman, Garrett Hedlund, Rooney Mara, Amanda Seyfried, and Levi Miller as the titular character. The film focuses on an alternative origin story of the famous Peter Pan and the other dwellers of Neverland.

The film premiered in London on September 20, 2015 and was theatrically released in the United States on October 9, 2015, by Warner Bros. Pictures.

Peter starts off as a 12 year old, seemingly abandoned orphan in a boys' orphanage (with nuns), aka Oliver Twist, with a very prominent and distinguishing streak of mischief and, sometimes, pride. He loves to make trouble for the head nun, believing her to be too controlling, cruel, and the do-er of much trouble (rightly so, for while under the pretense of 'evacuating the orphans', she in fact sold them to Blackbeard the Pirate, from Neverland), such as hoarding the orphans' rations (of which she was also guilty).

During a evacuation to the safe house, Peter and one of his friends (Nibs) snuck into the head nun's office (where they believed she was hiding the food), and accidentally (while trying to disfigure the statue of the Virgin Mary) sprung a trapdoor. The two boys explored and found, to their surprise, the records for all the orphans (of which there, with the ones already kidnapped to Neverland, seemed to be 34 or a little over). Reading Peter's record, they found a letter from his mother and had just finished reading it when they were surprised by the sound of gunshots. They ran back and found the head nun in her office.

The head nun mocked Peter, telling him that every orphan thinks they're special, and that he wasn't, 'not even in his own way' and ripping up the letter. She also told him and Nibs to do extra work, which was never shown.

After the punishment, Peter and his friend hatched a plot to find out why the orphans kept disappearing at night (They suspected, from all the money seen in her office trapdoor, that she'd been selling orphans). After waiting until nearly midnight (which the movie skipped), they decided to go to bed, and was promptly kidnapped themselves. Peter's friend (who wasn't afraid of heights, unlike Peter) jumped from the flying ship onto the orphanage roof, but Peter wasn't quick enough, and was whisked away to Neverland all while a Luftwaffe (Nazi air force) air raid was going on.

On arriving, they were immediately set to work mining for Pixels, otherwise known as fairy or pixie dust. There, Peter meets an harsh and unfriendly miner, who's been there for 14 years. He sharpens Peter's pick, then tells him to shoo. After a day of hard mining, Peter finds a lump of fairy dust, which other miners immediately steal. When he protests, he is sent to Blackbeard, who makes him walk the plank on his ship (which is flying high in the sky). Blackbeard kicks him off, and, half-way down, he starts to float in an uncontrollable roll. After his pleased exclamation (" I can't believe it! I can fl-"), he plummets down to the ground, becoming unconscious and waking up in Blackbeard's ship's office.

Blackbeard treats him to some chocolate, and a brief explanation of the ancient prophecy made when 'the fairy kingdoms reigned'. It tells of a boy who would disappear from Neverland until he was old enough to return and lead an uprising against Blackbeard. A boy who could fly. Peter doesn't believe him, seemingly convincing Blackbeard he isn't much of a threat, who has him quartered in a prison cell.

The unfriendly miner, who sensed an opportunity to escape, blows up the wall of the prison, on the condition that Peter would help him, who introduced himself (a good guy) as James Hook, not the pirate seen in Disney's Peter Pan, but a 'low-on-the-food-chain' fellow orphan miner, enslaved by Blackbeard.

After a brief battle to escape (in which they recruited a miner called Mr. Smee) they flew a stolen ship (The Jolly Roger) to find the tribes people, who found them (Tiger Lily, the princess of the tribes people, led the tribes people to find them) and pitted James Hook against their Pan, their best warrior (not Peter), from which James barely survived. After hearing that Peter can fly, and seeing that he wore a necklace (given to him by his mother) called the Pan, they gave him 3 days to prepare, saying he would either fly or die.

On the second day, Pirates find and invade the camp (which was betrayed by Mr. Smee), killing Tiger Lily's father, the chief, and telling Peter his mother died - killed by Blackbeard's sword.

Tiger Lily escaped, along with Peter and James Hook. They go to the one place Blackbeard wouldn't chase him - Mermaid lagoon, where James finds a old ship which can fly, and prepares to leave Neverland. Tiger Lily refuses to go with him, calling him a coward, and Peter follows her.

By this time, Blackbeard has found that there are more fairies, and more pixie dust to elongate his life. He led the rest of the Pirates to where the fairies were hidden, and stole Peter's necklace, which was the key, to open the barrier between him, and the fairy hive.

The next scene shows Tiger Lily and Peter tied to Blackbeard's mast pole. He meets Tinker Bell, the fairy, and tells her to run and hide from Blackbeard, who promptly starts incinerating the fairies. James Hook appears on the Jolly Roger replica ship he got in Mermaid Lagoon, and starts a battle. Peter flies and saves James Hook, who had fallen over the edge and also carries Tiger Lily to safety. Like James Hook, Blackbeard fell over the edge and presumably died.

The end scene shows Peter going back to the orphanage and recruiting all the orphaned boys (including his friend), maybe starting the group of 'Lost Boys', then calling himself the chosen one and James Hook, the captain.

The movie ends with Captain Hook saying, "Yeah, we'll always be friends [Peter]. After all, what could possibly go wrong*?", and with the Jolly Roger vanishing into Neverland.

Peter In The Mines

Leaving London During The Blitz

Testing If Peter is Pan 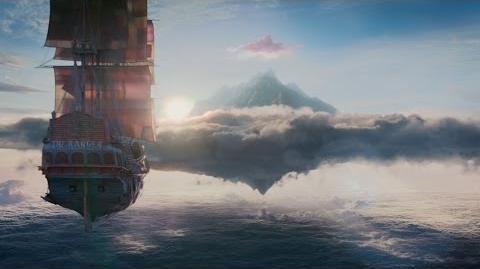 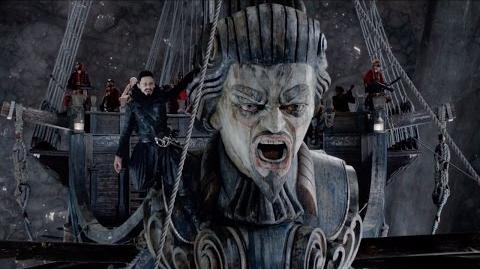