Neverland (also spelled Never Land and also known as Never Never Land) is a fictional island featured in the works of J. M. Barrie and those based on them.

Inhabitants who live on the mystical island of Neverland may cease to age if they so choose and it's best known resident Peter Pan famously refused to grow up, so it is often used as a metaphor for eternal childhood (and childishness), immortality, and escapism. Neverland has been featured prominently in subsequent works, either adapting Barrie's work or expanding upon them. These Neverlands sometimes vary in nature from the original, which seems fitting as Barrie originally described them as doing that.

to the original work and the 1911 novel, it is a physical manifestation of children's dreams, and is able to be reached through a child dreaming. However, it is possible to physically go there, and even to become a permanent resident. It's structure constantly changes and is slightly different for each individual who visits. 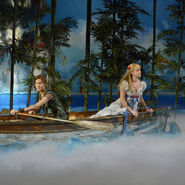 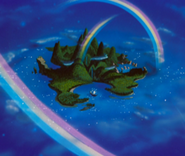 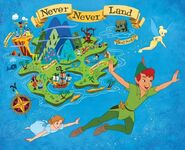 Add a photo to this gallery
Retrieved from "https://peterpan.fandom.com/wiki/Neverland?oldid=7648"
Community content is available under CC-BY-SA unless otherwise noted.