Edit
watch 01:36
We're Getting Mutants in the MCU - The Loop
Do you like this video?
Play Sound
"Blast that Mr. Smee

Oddly genial for a pirate, Smee typically represents a humorous side to pirating.

In the novel, Captain Hook notes Smee thinks that the children are afraid of him, when instead they clearly like him, trying on his glasses and laughing at his jokes. This caused Captain Hook much frustration and jealousy, believing that Smee represents good form, and that he himself would never be liked by children.

This is a full list of Peter Pan media Mr. Smee appears in. 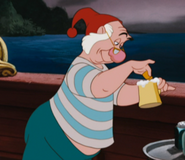