Fox's Peter Pan & the Pirates is an American animated television series based on J. M. Barrie's Peter Pan that originally aired on Fox Broadcasting Company from September 8, 1990 to December 2, 1991.

The television show focuses as much on the pirates as it does on Peter Pan. Captain Hook and Mr. Smee traditionally are the only pirates who receive any attention in the story, but here, the other crew members of the Jolly Roger (Robert Mullins, Alf Mason, Gentleman Ignatious Starkey, Billy Jukes, and Cookson) are given distinct personalities and character development. A real force to be reckoned with, Hook is a powerful, temperamental, cultured, intelligent, and charming pirate with an insatiable thirst for vengeance.

Some attention was also given to the Native American characters (no longer called Redskins). The people and their customs were often featured in the storyline.

The following show the differences from J.M. Barrie's book or other Peter Pan versions:

"This was supposed to be a celebration, not an execution!"
John Darling, from Peter Pan and the Pirates 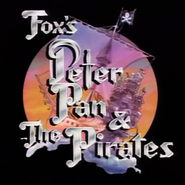 The Can Do Twins

Michael Darling From the episode The Coldest Cut Of All

Peter, The Twins and Darlings From the episode Elementary My Dear Pan

Wendy and Peter From the episode Hook's Mother's Picture

Peter From the episode Invisible Tootles

Peter being grounded From the episode Foot Race

Peter From the episode Sharman

Peter and Ratatat From the episode Evicted

Peter Pan, Slightly and Curly. From the episode Knights of Neverland

Peter Pan, John, and the Lost Boys. From the episode Stupid Smee