The Crocodile swallowed Captain Hook 's hand and now follows him around to eat the rest of him. It also swallowed Hook's tick-tock clock.

The crocodile is said to be female, and began trying to eat Captain Hook after having a taste of his hand. She eventually succeeded in this goal.

In Peter Pan in Scarlet, the crocodile was killed by Captain Hook's poison after trying to digest him.

In Peter and the Starcatchers, the Crocodile is male and named Mr. Grin, and prior to Hook, had already begun feasting on human flesh.

In the Disney film, the Crocodile's name was Tick-Tock, because of his tick-tock sound of the clock he swallowed. He also tried to eat Hook every time he appeared. In the near end, he chases hook, hoping to eat him.

In the film Hook, the crocodile is turned into a clock tower but comes back alive near the end and eats Hook.

Main article: Crocodile (Once Upon a Time)

The crocodile from Neverland. 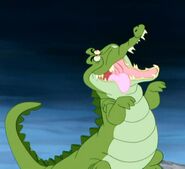 The Crocodile from Disney's Peter Pan

The Croc in Fox's Peter Pan & the Pirates

The crococdile in Peter Pan no Bouken

Tick-Tock the Crocodile from Jake and the Never Land Pirates

The Crocodile Crocky from Pirate Fairy

The Crocodile from Peter Pan (1987) СССР «Беларусьфильм» Film-Tale
Add a photo to this gallery
Retrieved from "https://peterpan.fandom.com/wiki/Crocodile?oldid=7647"
Community content is available under CC-BY-SA unless otherwise noted.