Jason Isaacs
"He has found himself a... Wendy. And Hook is all alone."
Captain Hook, Peter Pan, 2003

The 2003 Universal film adaption's version of Captain Hook is much closer to the book than most other adaptions. Hook is ruthless and cunning; it's not any specific scene exactly, but the whole sequence where Wendy is captured by Hook and his pirates hints at how dark and twisted the man is.

This interpretation of Captain Hook is just as cruel as his novel counterpart, but with a much more seductive and manipulating side, neaarly convincing Wendy to leave the lost boys to become a pirate.

He is very violent, shooting members of his own crew for various screw-ups.

However, he is a more tragic character than most other interpretations, envying that Peter has found Wendy while he is alone, and trying to make Wendy one of his own pirates so that Peter will no longer have her.

Hook is directly paralleled with Peter himself - he is pretty much an old and embittered version of Peter.

Certainly, his pirates are parallel to the Lost Boys , and Wendy 's role as 'mother' to the Lost Boys is repeated with the pirates, so the scenes he has with Wendy hint at a possible dark relationship. The relationship between Wendy and Hook is uncomfortable for adult viewers in this adaptation since Hook's usurping of Pan's role extends to having Wendy as a partner in crime - but this is only because they perceive the sexuality underlying the relationship between Peter and Wendy.

In his second scene with Wendy on board the Jolly Roger, when he has her lashed to the mast and is basically trying to terrify information out of her Hook is no longer treating her as an adult treats a child, they seemed almost like equals, and that let viewers believe that he might go too far.

True to the book, he has long, curled black hair, a simple mustache, and a hook on his right hand. However, he also sports a goatee, and has a large device to strap the hook on that goes over his shoulder to displace the weight.

Also true to the book, his eyes light up red when he is about to plunge his hook into someone. 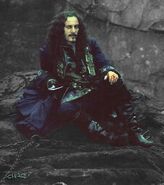